Like Ford, Kennedy is being built using modular construction, a process where smaller sections of the ship are welded together to form larger structural units (called “superlifts”), equipment is then installed, and the large superlifts are lifted into the dry dock using the company’s 1,050-metric ton gantry crane.

“This is a significant milestone in the ship’s construction schedule,” said Mike Shawcross, Newport News’ vice president, John F. Kennedy (CVN 79) and Enterprise (CVN 80) aircraft carrier construction. “We are halfway through lifting the units onto the ship, and many of the units are larger and nearly all are more complete than the CVN 78 lifts were. This is one of many lessons learned from the construction of the lead ship that are helping to reduce construction costs and improve efficiencies on Kennedy.”

After several days of preparations, the 932-metric ton lower stern lift took about an hour to complete, thanks to a team of about 25 shipbuilders—from riggers and the crane operator to shipwrights and ship fitters. The lower stern consists of 30 individual units and includes the ship’s rudders, steering gear rooms and electrical power distribution room. The carrier is on track to be completed with 445 lifts, which is 51 fewer than Ford and 149 fewer than USS George H.W. Bush (CVN 77), the last Nimitz-class carrier. 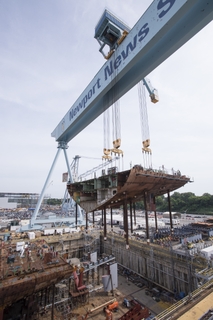 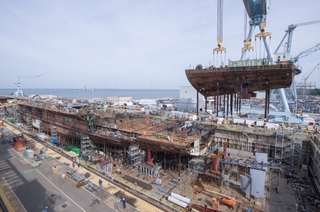 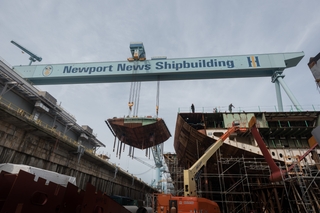 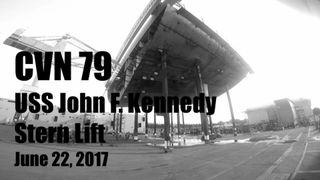