Like its predecessor, the first-in-class USS Gerald R. Ford (CVN 78), Kennedy is being built with a modular construction technique where smaller sections of the ship are welded together to form larger structures called superlifts. The superlifts are pre-outfitted and hoisted into Dry Dock 12—where the ship is being built—by the company’s 1,050-metric ton gantry crane.

Shipbuilders have successfully erected 317 lifts since the ship’s keel was laid in August 2015. Kennedy is on track to be completed with 447 total lifts.

The recent 806-metric ton superlift consisted of 17 individual units and was about 171 feet long and about 92 feet wide. The structure comprises berthing areas, electrical equipment rooms and workshops and took 18 months to build.

“This superlift is in the forward part of the ship, about halfway between the bow and midship,” said Mike Butler, program director of CVN 79. “It represents one of the key build strategy changes for Kennedy: building superlifts that are larger and more complete before they are erected on the ship. We are pleased with how construction on the Kennedy is progressing, and we look forward to additional milestones as we inch closer to christening of the ship.”

Kennedy is scheduled to launch in 2020. 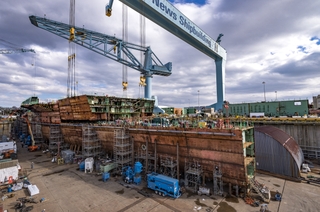 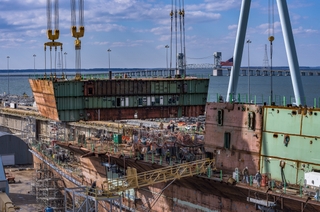 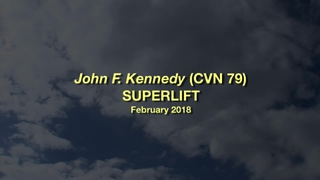