NEWPORT NEWS, Va. (Sept. 6, 2016)—Huntington Ingalls Industries (NYSE:HII) is showcasing Ali Harkous, manager of the surface program management office at HII’s AMSEC subsidiary, as the company’s latest brand ambassador for its new Shape of Freedom advertising campaign. Harkous, an immigrant from Lebanon and U.S. Navy veteran, shares his dedication to his work at AMSEC through a series of print and online ads and a company video.

Harkous left Lebanon during a civil war in the 1970s and immigrated to the U.S. to attend college. Following graduation, he served in the U.S. Navy and then began work at AMSEC in San Diego, helping sailors operate and repair equipment aboard Navy ships.

“Giving sailors the ability to maintain their equipment and operate sufficiently while they’re underway—and in harm’s way—gives us the freedom that we enjoy here in the United States,” Harkous said. “It makes me proud to know we’re making a difference in our sailors’ lives.”

“It’s in our blood to help the sailors,” Harkous said. “Wherever you find the U.S. Navy, you will find Huntington Ingalls Industries.”

Harkous joins three other HII employees from the company’s Newport News Shipbuilding and Ingalls Shipbuilding divisions who have been featured in the Shape of Freedom campaign. 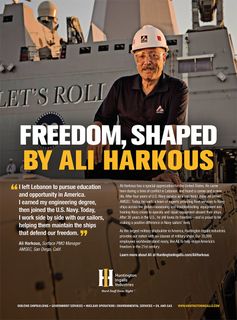 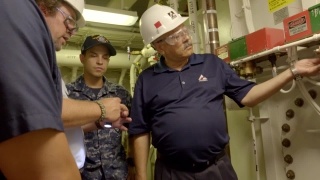