The ringing of a ceremonial bell by each of the 2018 graduates represented the completion of their apprenticeship, a rigorous four- to eight-year program designed to develop the next generation of shipyard leaders. The Apprentice School, which first opened in 1919 with 126 apprentices, is celebrating its centennial anniversary this year. Over the last 100 years, the school has produced more than 10,800 graduates. 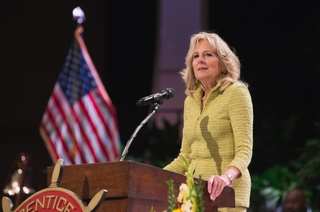 In her commencement address, Jill Biden, the Second Lady of the United States from 2009 to 2017, honorary co-chair of the Biden Foundation and community college professor, congratulated the new class of apprentices and lauded their hard-earned skills.

“You are starting a new journey, one where you are a part of a family with a hundred years of historic accomplishments, one that will continue to shape America’s future,” Biden said. “While there will be times where you face challenges, you should never forget that your work is needed and revered by so many.”

“To casually say that you build ships falls woefully short of how you serve the United States of America,” Boykin said. “I’m challenging you to think bigger. You build diplomacy, you build democracy, and you build freedom. You are our future, and our legacy is in your capable hands.

“I have no doubt that the dedication, determination and sacrifice that led to your success today will ensure our collective success tomorrow and for centuries to come,” she said.

Kevin McNeill of Greensboro, N.C., received the Homer L. Ferguson Award, which recognizes the apprentice graduating with the highest honors. He is the first African-American student in the school’s history to earn the special recognition.

McNeill, who first graduated from North Carolina A&T State University with a degree in electrical engineering, told graduates about living out their own mission.

“I never intended to work as a steel fabrication apprentice, but I’ve gained experiences and opportunities that I may not have received elsewhere,” he said. “I’ve learned a great deal of discipline and patience. My message for you today is: If you’re not where you want to be in your career or you feel like you’ve strayed off track from your goals, know that each experience is what makes you unique. The path to our destination is never straight. Keep walking with a purpose.”

The following is a profile of the 2018 graduating class: 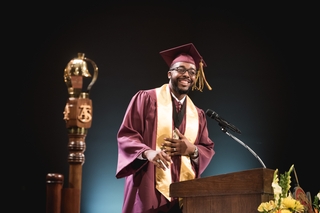