Working with the U.S. Navy crew aboard Lincoln, Newport News shipbuilders are testing the steam catapult systems through a process called “no-load” testing, during which the overhauled components in the catapult systems are operated with steam for the first time.

“When an aircraft carrier undergoes its overhaul, we completely update and modernize the components in the ship’s catapult systems,” said Chris Miner, Newport News’ vice president of in-service aircraft carrier programs. “Many of the components are tested at a land-based facility prior to being installed into the ship for final testing. It’s rewarding to see the hard work of the shipbuilders and the Navy culminate in ‘shooting’ the catapults with steam for the first time in over three years. The testing of the catapults is another signal that this great ship is coming back to life and will soon rejoin the fleet for another 25 years of service to our country.”

Capt. Ronald Ravelo, the ship’s commanding officer, was on the flight deck and gave the signal to launch the first “no-load.” “To everyone involved in this huge and significant milestone, thank you,” Ravelo said. “The test reminds us that this is what aircraft carriers do: We launch aircraft to project combat power from the sea in support of our national interests.”

The testing involves shooting the catapults about 20 times with less than two minutes of recovery time between operations. Lincoln is in the final stages of testing all of its steam-powered systems.

Lincoln’s RCOH began in March 2013. The entire process takes about 44 months, during which Newport News shipbuilders complete more than 23 million man-hours of maintenance and modernization work. The ship is on track to redeliver in 2016.

RCOH is the mid-life refueling overhaul and maintenance availability of a Nimitz-class aircraft carrier that produces a recapitalized carrier capable of supporting current and future warfare doctrine. Once Lincoln’s RCOH is complete, the carrier will be equipped to operate in the U.S. Navy fleet for the second half of its 50-year expected service life. 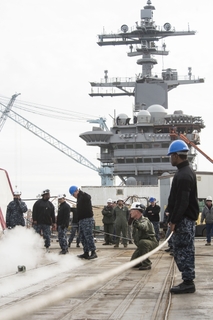 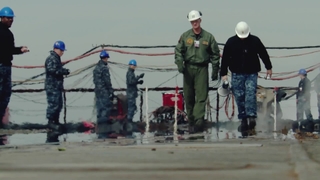