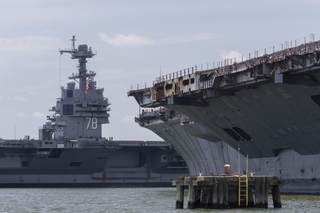 USS Gerald R. Ford (CVN 78) was moved Sunday, July 15, 2018, to Newport News Shipbuilding's Pier 3, where it will undergo its scheduled post shakedown availability for the next 12 months. Photo by John Whalen/HII

Ford was moved to the shipyard’s Pier 3, where it will undergo a maintenance period typical of newly delivered warships. Work will include modifications, upgrades, system improvements and repairs and is scheduled to take 12 months.

“We have been planning for the Ford’s return to Newport News since it was delivered last year,” said Bill Smith, Newport News’ vice president of fleet support programs. “This availability is the next important milestone in the life of the ship. We have worked closely with our Navy partners to identify first-in-class issues that came along during the test and evaluation program and look forward to resolving them.

“We have learned a lot from the Ford,” Smith said. “We look forward to applying the lessons learned to future ships of the class.”

“I’m so proud that USS Gerald R. Ford has achieved another important milestone with commencement of her scheduled post-shakedown availability,” she said. “My fellow Newport News shipbuilders will now take the lessons learned from the Ford’s past year at sea and update her with the newest technological advancements and improvements. I’m delighted—as Dad most certainly would be—to extend heartiest well wishes to the shipbuilders and Navy crew on this latest chapter in the life of CVN 78.”

Designed to replace Nimitz-class aircraft carriers that were first built more than 40 years ago, the Ford-class features a new nuclear power plant, a redesigned island, electromagnetic catapults, improved weapons movement, an enhanced flight deck capable of increased aircraft sortie rates, and growth margin for future technologies. Each Ford-class ship will operate with a smaller crew than a Nimitz-class carrier and will provide increased ownership cost-savings throughout its expected 50-year operational life.