“The DDG 51 program provides our U.S. Navy customer and our nation a series of highly advanced and capable warships,” said Ingalls Shipbuilding President Brian Cuccias. “For 30 years, our talented shipbuilders have been building these much-needed, quality destroyers. Launching DDG 117 is an important milestone in the life of the ship, which will continue building toward fleet readiness in 2018.”

Paul Ignatius was translated via Ingalls’ rail car system to a floating dry dock. Once on, the dry dock was moved away from the pier, and it was ballasted to float the ship.

“Ingalls shipbuilders continue to partner with our Navy and Supervisor of Shipbuilding team to conduct these evolutions in a safe and efficient manner,” said Kari Wilkinson, Ingalls’ vice president, program management. “This collective team put in a lot of hard work this week, and they should be very proud of their accomplishments.”

DDG 117 is named in honor of Ignatius, who served as Secretary of the Navy from 1967 to 1969 and was the Assistant Secretary of Defense during President Lyndon B. Johnson’s administration. 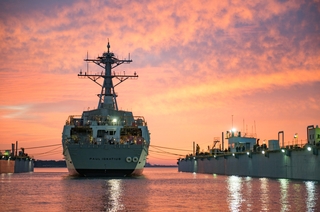 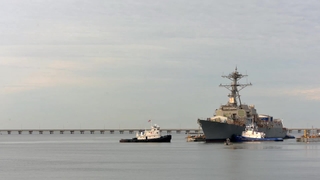