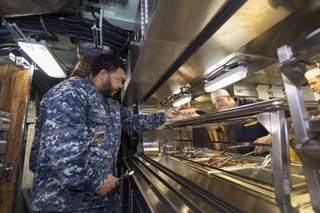 Mrs. Donald and the crew dined on French onion soup and shrimp cocktail. The main course consisted of New York strip steak, butterflied lobster with bacon-wrapped scallops, baked potatoes and broccoli.
“It was a privilege to join the Indiana crew for the first meal,” Donald said. “Building a submarine is a long journey with a lot of hard work required from the entire team of shipbuilders and crew, and sometimes it’s hard to see the progress.

“Today, I could see and feel Indiana coming to life. I’m so proud of Team Indiana and look forward to getting ‘our ship’ to sea and to the fleet.”

The nuclear-powered fast attack submarine is in the final stages of construction at HII’s Newport News Shipbuilding division. The submarine's next significant construction milestone is initial sea trials.

“Of all of the milestones we celebrate in the construction of a submarine, the first meal is one of the most special because it symbolizes the first of what will be thousands of meals served to the crew during the ship’s operational life,” said Dave Bolcar, Newport News’ vice president of submarine construction.

Construction of Indiana began in 2012. The boat—the 16th Virginia-class submarine built as part of the teaming partnership with General Dynamics Electric Boat—was christened in April 2017. Indiana is 98 percent complete and on schedule to be delivered to the U.S. Navy later this year. 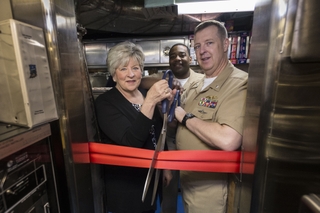