“Landing the upper mast is one of the most visible construction milestones in the mid-life refueling overhaul and maintenance availability of an aircraft carrier,” said Chris Miner, Newport News’ vice president, in-service aircraft carrier programs. “We are making significant progress with George Washington and look forward to returning a fully recapitalized, mission-ready ship to the fleet for another 25 years of service.”

To commemorate the milestone, George Washington sailors on Friday held a brief mast-stepping ceremony that recognizes an ancient maritime custom of placing a coin underneath the ship’s mast to bring good fortune. A time capsule containing photos, a piece of the old mast, several coins and other artifacts was attached to a metal plate, which later will be welded under the mast.

“Mast-stepping is a way to link the past with the future,” said Capt. Glenn Jamison, the ship’s commanding officer. “It is a way to honor the heritage of this ship and our namesake. George Washington once said that ‘without a decisive naval force we can do nothing definitive, and with it, everything honorable and glorious.’ Now, with this new mast signifying the progress we're making during RCOH, USS George Washington is ready to carry on the mantle of representing the Navy as only General George Washington could have imagined and wanted.”

The ship arrived at Newport News in August 2017 to begin the complex engineering and construction project and is currently in dry dock for hull and freeboard blasting and painting; repairs to its propellers, sea chests, shafts and rudders; and defueling and refueling of its power plant.

George Washington, the sixth Nimitz-class aircraft carrier to undergo this major life-cycle milestone, is on track for delivery in 2021. 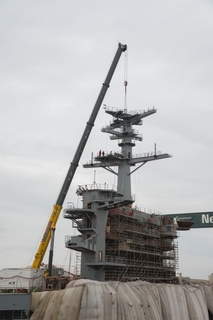 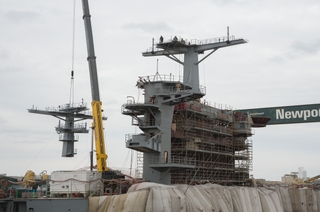 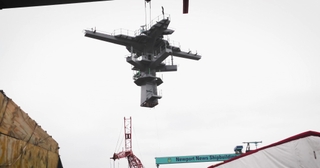