Vannia Willis was presented a Community Service Award, which recognizes women of color who use technology in novel ways to improve access to STEM jobs and educational opportunities. HII photo

Huntington Ingalls Industries was among the corporate sponsors that supported this year’s event, which was held Oct. 13-15 in Detroit.

Vannia Willis, an 18-year engineering veteran at Newport News, was presented a Community Service Award, which recognizes women of color who use technology in novel ways to improve access to STEM jobs and educational opportunities. Among her many activities to encourage youth participation in STEM, Willis helped start the first Lego Mind Storm Robotics Program in southeast Washington and developed a tutoring program for middle and high school students at a local church. She also organized a program that challenged students’ logic and strategic capabilities as part of Math, Engineering, Science Achievement (MESA), and she serves as technology lead for First Robotics and Newport News’ Girls Engineer Minds in Shipbuilding (GEMS) program. She has also been lead coordinator for the Women of Color and BEYA K-12 STEM workshops since 2009.

Four HII employees received Technology All Star awards, which recognize accomplished women of color from mid-level to advanced stages of their careers who have demonstrated excellence in the workplace and in their communities. They are: 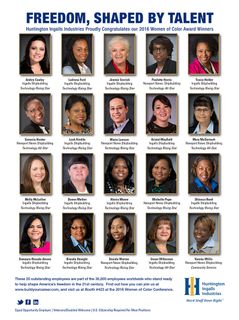