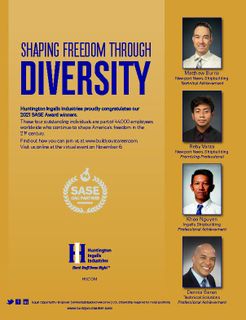 Huntington Ingalls Industries proudly congratulates our 2021 SASE Award winners. These five outstanding individuals are part of more than 44,000 employees worldwide who continue to shape America’s freedom in the 21st century. Find out how you can join us at www.buildyourcareer.com.

Matthew Burris, an engineer at Newport News Shipbuilding, received the Career Achievement award. The award recognizes highly experienced, mid-career professionals who have made significant achievements in engineering and the nominee’s performance as a role model and mentor for Asian and Pacific Islanders in technology.

Additionally, two employees at Newport News Shipbuilding were recognized with STEP Ahead awards by The Manufacturing Institute for their achievements in science, technology, engineering and production.

The STEP Ahead awards highlight the accomplishments of women at all levels of the manufacturing industry who exemplify leadership and demonstrate excellence in their careers. The program was created to encourage women to mentor and support the next generation of female talent to pursue manufacturing careers.

The employees were among 130 women honored during an awards reception in Washington, D.C. They include Emily Frantz, a construction supervisor responsible for project organization at the Kesselring Site, in West Milton, New York, who works closely with production as a project manager creating schedules, ensuring safety and supporting execution. She was recognized as an emerging leader.

Teresa Mullen is a construction supervisor who coordinates and supervises construction processes for U.S. Navy aircraft carrier tanks, shielding and third decks. Her responsibilities include defining project scope, goals and deliverables in support of the build strategy and key event schedule. She was recognized as a STEP Ahead honoree.

Demetria Petty-Manes, an electrical engineer at Newport News Shipbuilding, was recognized with the Prism Award for her achievements at this year’s annual Society of Women Engineers (SWE) Award Conference. The Prism Award recognizes an individual who has charted their own path throughout their career, providing leadership in technology fields and professional organizations along the way. Petty-Manes is responsible for supporting the CVN 78 ship design manager in resolving issues related to cost performance, schedule, technical changes and program modifications.

SWE was founded in 1950 with a mission to empower women to achieve their full potential in careers as engineers and leaders; expand the image of the engineering and technology professions as a positive force in improving the quality of life; and demonstrate the value of diversity and inclusion.