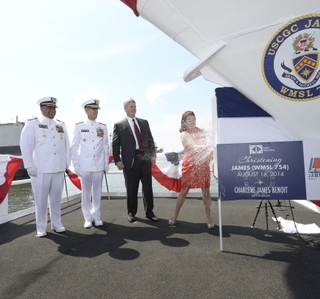 Charlene James Benoit, great-great niece of the ship's namesake, Capt. Joshua James, is the ship sponsor. At the culmination of the ceremony, Benoit smashed a bottle across the bow of the ship, proclaiming, "May God bless this ship and all who sail in her."

"The boundaries surrounding illegal migrant activity, weapons, drug smuggling and terrorism continue to blur and converge," said Vice Adm. Peter Neffenger, vice commandant of the U.S. Coast Guard and the ceremony's principal speaker. "The challenges created by that convergence require a 21st century Joshua James. We need his spirit and his adherence to our values. We need his adaptability, his staying power and his multi-mission focus.

"As we take Joshua James' legacy with us from the 19th century into the future, we do so in the face of one of the most challenging times in Coast Guard history," Neffenger continued. "New challenges, driven by complex and uncertain times, require new ways of thinking, new strategies and the right platforms for 21st century mission execution. Platforms like the National Security Cutter."

Speaking of the Ingalls shipbuilders, HII CEO and President Mike Petters said, "Like Capt. James, we are not motivated by notoriety, distinction or fame. The work is its own reward. We love building these ships, and we would love to build more. And we love knowing they help save lives—while also protecting our American way of life."

Capt. James is one of the world's most celebrated lifesavers. His lifesaving began at age 15 when he joined the Massachusetts Humane Society. Over the years, until the age of 75, he was credited with saving more than 600 lives until his death at age 75. He was on duty with the U.S. Life-Saving Service, which later merged with the U.S. Coast Guard.

"Teamed with the Coast Guard, this is a fantastic program, providing high-quality ships at a great value," Ingalls Shipbuilding President Brian Cuccias said. "The more of these ships we build, the better we get at it, producing each ship for fewer man-hours. We call this a 'learning curve,' and the NSC learning curve is an excellent one. Our shipbuilders know they're building these cutters for America's heroes—Coast Guard men and women, our friends, our neighbors, our sons, daughters, nieces and nephews. So our shipbuilders take their jobs personally."

Legend-class NSCs are the flagships of the Coast Guard's cutter fleet. Designed to replace the 378‐footHamilton-class High-Endurance Cutters that entered service during the 1960s, they are 418 feet long with a 54-foot beam and displace 4,500 tons with a full load. They have a top speed of 28 knots, a range of 12,000 miles, an endurance of 60 days and a crew of 110.

"As the fifth ship in the Legend-class of NSCs, I have been so impressed to see her come together," said Rep. Steven Palazzo, R-Miss. "Together with the Coast Guard, the shipbuilders of the Gulf Coast and our nation's homeland security leadership, we will continue to strengthen what is already the best trained and most dedicated Coast Guard in the world.

NSCs are capable of meeting all maritime security mission needs required of the High-Endurance Cutter. They include an aft launch and recovery area for two rigid hull inflatable boats and a flight deck to accommodate a range of manned and unmanned rotary wing aircraft. The Legend class is the largest and most technologically advanced class of cutter in the Coast Guard, with robust capabilities for maritime homeland security, law enforcement, marine safety, environmental protection and national defense missions. NSCs play an important role enhancing the Coast Guard's operational readiness, capacity and effectiveness at a time when the demand for their services has never been greater. 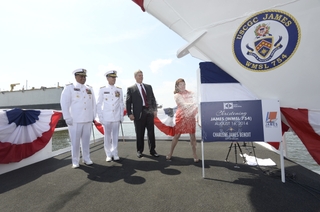