“A quality launch is a critical milestone in a ship’s life,” said Ingalls Shipbuilding President Brian Cuccias. “Our world-class shipbuilders have once again met this goal in launching DDG 119. We look forward to continuing this success as we prepare DDG 119 to join the fleet as USS Delbert D. Black as our nation needs these DDG 51-class warships in a timely and affordable manner.”

Delbert D. Black was translated via Ingalls’ rail car system to a floating dry dock. Once on, the dry dock was moved away from the pier, and it was ballasted down to float the ship.

To date, Ingalls has delivered 29 Arleigh Burke-class destroyers to the U.S. Navy, most recently delivering USS John Finn (DDG 113), which was commissioned on July 15. Other destroyers currently under construction at Ingalls include Paul Ignatius (DDG 117), Frank E. Petersen Jr. (DDG 121) and Lenah H. Sutcliffe Higbee (DDG 123). In June, Ingalls received a contract modification to incorporate the “Flight III” upgrades to Jack H. Lucas (DDG 125), which will start fabrication in 2018.

“Translation and launch are always exciting events in the life of a ship,” said George Nungesser, Ingalls’ DDG program manager. “Our shipbuilders put in a tremendous amount of effort over the last few days to make this launch a success. The DDG program continues to see the benefits that come with serial production. Our team has the skills, knowledge and experience it takes to build these state-of-the-art destroyers for the U.S. Navy.”

The ship is named in honor of Delbert D. Black, who served as a gunner’s mate in the Navy and was aboard the battleship USS Maryland (BB 46) during the attack on Pearl Harbor. Black served in three wars and was the first Master Chief Petty Officer of the Navy. 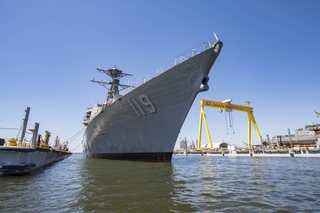 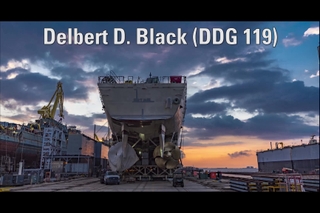