The unit, which has been under construction since August 2015, is made up of 22 smaller units and comprises small equipment and machinery rooms, berthing, and other quality-of-life spaces, such as the barber shop and post office. It measures about 80 feet long and 105 feet wide. Like Ford, Kennedy is being built using modular construction, a process where smaller sections of the ship are welded together to form large structural units, equipment is installed, and the large units are lifted into the dry dock using the shipyard’s 1,050-metric ton gantry crane.

Kennedy is about 25 percent complete. The carrier is on track to be completed with 445 lifts, which is 51 fewer than Ford and 149 less than USS George H.W. Bush (CVN 77), the last Nimitz-class carrier. About 140 lifts have been placed in the dock and joined together since the ship’s keel was laid in August 2015. Kennedy is scheduled to be launched in 2020 and deliver to the Navy in 2022, when it will replace USS Nimitz (CVN 68). 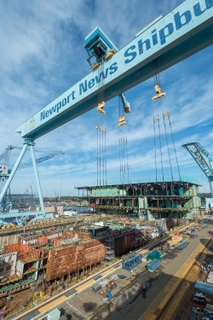 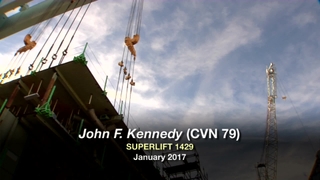