“It’s exciting to see another Ingalls-built destroyer in the water,” said DDG 51 Program Manager George Nungesser. “Our shipbuilders have proven time and time again they can handle whatever it takes to build, test and deliver these extremely complex warships. This launch was no exception. Our hot production line is now in a good state as we have three DDGs under construction and another one in pre-fabrication. What our shipbuilders accomplish every day matters to our quality, cost and schedule, and implementing our learning from ship to ship will allow us to improve in every aspect of destroyer construction.”

Ingalls uses a safe and efficient method of launching ships and has been using that process for more than 40 years. John Finn was moved on rail cars from land to the company’s floating drydock a week prior to launch. Shipbuilders then spent the next week preparing the ship and dry dock for Saturday’s launch.

“This is the first DDG 51-class ship to launch in almost four years, and we’re both proud and excited with the progress the program is making,” said Capt. Mark Vandroff, the U.S. Navy’s DDG 51-class program manager. “I look forward to John Finn joining the fleet and the other ships of her class to continue in the legacy of success that is the Arleigh Burke destroyer.”

Arleigh Burke-class destroyers are highly capable, multi-mission ships that can conduct a variety of operations, from peacetime presence and crisis management to sea control and power projection, all in support of the United States’ military strategy. They are capable of simultaneously fighting air, surface and subsurface threats. The ship contains myriad offensive and defensive weapons designed to support maritime defense needs well into the 21st century. 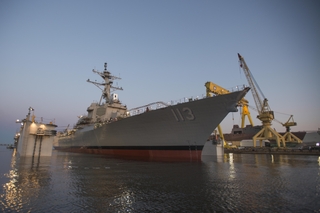 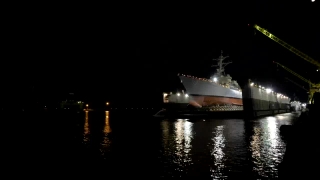