Ingalls Shipbuilding will authenticate the keel of the amphibious assault ship Tripoli (LHA 7) on Friday, June 20. The ship will be officially authenticated by the ship's sponsor Lynne Mabus, wife of Secretary of the Navy Ray Mabus.

A media availability will take place after the ceremony.

At the culmination of the ceremony, Mrs. Mabus will signify that the keel of Tripoli has been "truly and fairly laid." Ingalls welder George Powe will weld her initials, along with HII employee Steve Senk's, onto a ceremonial keel plate that will remain with the ship. Senk, who works at the company's Continental Maritime subsidiary in San Diego, served in the U.S. Navy as a lieutenant commander on the second Tripoli (LPH 10), an amphibious assault ship also built at Ingalls. He was awarded the Silver Star for his heroics on the ship after it was hit by a mine in the Persian Gulf in 1991.

LHA 7 will join LHA 6 as the first two ships in the new America class of amphibious assault ships for the U.S. Navy. The ship will be 844 feet long and 106 feet wide and will displace 44,971 long tons. The fuel-efficient gas turbine propulsion system will drive the ship in excess of 20 knots. It will accommodate 1,204 crew (102 officers) and 1,871 troops. Tripoli will be capable of carrying a Marine Expeditionary Unit, including Marine helicopters, MV‐22 Osprey VTOL tiltrotors aircraft and F‐35B Joint Strike Fighters (JSF) STOVL aircraft.

Tripoli will be the third ship to bear the name that commemorates the capture of Derna, Libya, in 1805 by a small force of U.S. Marines and approximately 370 soldiers from 11 other nationalities. The battle, later memorialized in the Marines' Hymn with the line "to the shores of Tripoli" brought about a successful conclusion to the combined operations of the First Barbary War. 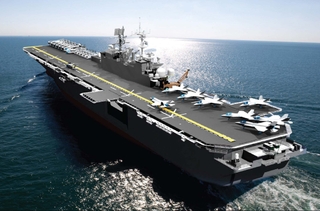