With a famous 50-year career as the Navy's first nuclear-powered aircraft carrier, USS Enterprise (CVN 65) will come full circle, returning to the shipyard that built her for the first inactivation of an aircraft carrier. About 100 shipbuilders who helped construct and maintain the ship over her lifetime will ride aboard for her final voyage, and the whistles and horns of docked ships and NNS will blow to honor "Big E's" return. 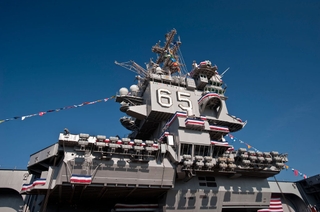