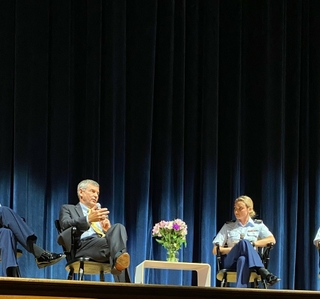 NEW LONDON, Conn., (Nov.  02, 2021) --  Mike Petters, president and CEO of Huntington Ingalls Industries, delivered a clear call on Thursday, Oct. 28 to roughly 1,000 U.S. Coast Guard Academy cadets for leadership by example, with an understanding of what motivates a team and workforce.

Petters, who is passionate on matters of leadership and workforce development, joined three cadets on stage at the 32nd U.S. Coast Guard Academy Admiral Thomas Wetmore Annual Ethics Forum to discuss ethics and the impact it could have on leadership decisions.

“Great leaders recognize thousands of people who are motivated to do their best work, not just to follow your orders. When you unleash and unlock that motivation from a leadership standpoint, not only are they interested in solving those complex problems, they thrive on that and in fact have superior performance,” Petters said to the cadets.

Petters encouraged the cadets to develop good ethical habits and think about all the ethical decisions we make on a daily basis.

He said the cadets must practice daily and understand the impact of their actions in an effort to develop good habits.

“Be that person in the group who makes everyone around you better,” Petters said.

“Sometimes it’s the person next to you who gets the promotion but the people in that group, they know. And that becomes a bond that transcends geography and time.”

Petters, who earned a bachelor’s degree in physics from the U.S. Naval Academy in 1982 and an MBA from the College of William and Mary in 1993, served aboard the nuclear-powered submarine USS George Bancroft (SSBN 643) and spent five years in the U.S. Naval Reserve. He previously served as president of Northrop Grumman Shipbuilding and as president of Northrop Grumman’s Newport News sector. He joined Newport News Shipbuilding in 1987 in the Los Angeles-class submarine construction division. 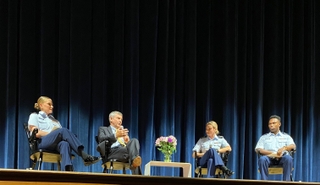