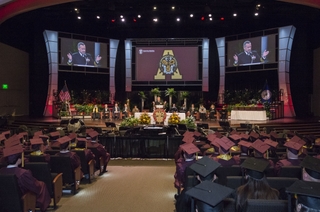 Rear Adm. Mat Winter, the U.S. Navy’s deputy program executive officer for the F-35 Lightning II, reminded the company’s newest shipbuilders during his commencement address that everything they have achieved and will continue to achieve makes a difference.

“Newport News Shipbuilding is a leader—a leader on the global stage in providing war-fighting capability to our Navy,” Winter said. “You just have to look around and see our submarine fleet and our surface fleet and those great American aircraft carriers that are here and around the world doing the diplomacy and the engagement and the power projection that keeps our nation safe and allows us to do what we need to do every day. The fact is that those sailors and Marines are out on the pointy end, and they are there because of you, and because of what you’ve done and what you are going to do.”

Of the 184 graduates, 13 are military veterans or are currently serving in the Armed Services as reservists and guardsmen.

Newport News Shipbuilding President Matt Mulherin addressed the graduates as the shipyard’s newest leaders. “Leadership is not a title or a position,” he said. “A leader produces results and sets examples. You, indeed, are all leaders, and I commend you and I applaud you on this defining moment in your shipbuilding careers and in your lives.”

Evan George Danz received the Homer L. Ferguson Award for earning the highest grade point average for required academic and craft grades combined. Danz is a naval architect who began his shipbuilding career in 2013 as an outside machinist apprentice.

“There is truth in the old saying: ‘Blame the carpenter and not the tool,’” Danz said. “A drill is only as effective as the person who holds it. Our tasks may have been difficult and some have been repetitive, but we were always improving our technique, speed, efficiency and critical thinking. We are more valuable to our shipbuilding community than any tool, drill, saw or crane could ever be.” 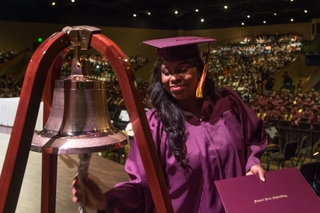