The contract is valued at $27.9 million. Work under this contract consists of advanced planning for a Dry Dock Planned Incremental Availability, which is scheduled for 2005 at the Newport News shipyard. It will include work scheduling, engineering and design work, material procurement, ship checks and personnel training.

"This planning contract is very important to us in preparation for the ship's arrival in 2005," said Bob Gunter, senior vice president of the Aircraft Carrier program at Northrop Grumman Newport News. "It enables us to work closely with our Navy customer to develop a framework to ensure successful execution of the project."

USS George Washington (CVN 73) is the sixth nuclear-powered Nimitz-class aircraft carrier built by Northrop Grumman Newport News. It was launched in 1990 and delivered to the Navy in 1992. The George Washington is 1,092 feet with a flight-deck width of 252 feet and a displacement of 97,000 tons. It can travel in excess of 30 knots. 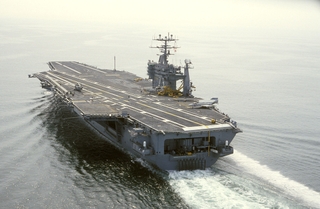 This Nimitz-class aircraft carrier was built by Northrop Grumman Newport News and delivered to the U.S. Navy in 1992.
View | Download (522.3 kB)