PASCAGOULA, Miss., Jan. 26, 2008 (PRIME NEWSWIRE) -- In a traditional U.S. Navy ceremony here Saturday, the U.S. Navy's 55th Aegis guided missile destroyer, Dewey (DDG 105), built by Northrop Grumman Corporation (NYSE:NOC), was christened in front of more than 1,000 guests. Principal speaker Adm. Michael Mullen, chairman of the Joint Chiefs of Staff, said DDG 105 "Must always be prepared to chart a course into the future with the will to fight from the heart."

"No one can predict where Dewey will go, what she will do, or whether her guns will ring in thunder or her missiles fly in fury," Adm. Mullen continued. "The United States, a maritime nation with international interests, will remain globally engaged. This requires a ready and balanced force. Dewey sailors will be a part of that force and they must be prepared to answer our nation's call."

Deborah Mullen, Adm. Mullen's wife, served as the ship's sponsor and broke a champagne bottle across the bow, proclaiming, "In the name of the United States of America, may God bless this ship and all who sail on her. I christen thee Dewey."

Dewey honors Admiral George Dewey (1837-1917), best known for his victory at the Battle of Manila Bay during the Spanish-American War.

Dewey (DDG 105) is the third ship to bear Admiral Dewey's name. The first was a destroyer (DD 349) that survived the attack on Pearl Harbor and went on to receive 13 battle stars for World War II service. The second was a destroyer commissioned as a guided missile frigate (DLG 14) before being reclassified as guided-missile destroyer (DDG 45).

"This great shipyard has built many of the Aegis ships serving around the world today combating our nation's war on terrorism and in the defense of our vital national interests," said John Thackrah, acting assistant secretary of the Navy for research, development and acquisition. "This shipyard, its employees and the Gulf Coast Navy family can take great pride in the critical role they fill in meeting our nation's shipbuilding and defense needs."

DDG 105 is the 26th Arleigh Burke-class destroyer to be launched and christened of 28 contracted to Northrop Grumman's Ship Systems sector. The company's first 24 Aegis destroyers have been delivered to the Navy.

Cmdr. Warren R. Buller of Concord, Mass., is the prospective commanding officer of the ship and will lead the crew of 292 officers and enlisted personnel.

The 509-foot, 9,200-ton Dewey has an overall beam of 66.5 feet and a navigational draft of 31 feet. Four gas turbine propulsion plants will power the ship to speeds above 30 knots.

"Dewey has been through a lot to reach this day and has already proven she's a survivor," said Philip Teel, corporate vice president and president of Northrop Grumman Ship Systems. "With today's milestone, she's one step closer to joining the most powerful fleet in the world. I have no doubt she is destined for great things." 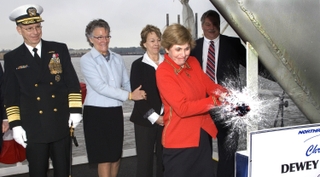