Gerald R. Ford is being built using modular construction, a process where smaller sections of the ship are welded together to form large structural units called superlifts. The superlifts are pre-outfitted and lifted into the construction dry dock with the shipyard's 1,050-metric ton crane.

The final superlift of the ship's aft end includes the steering gear rooms, electrical power distribution room, store rooms and tanks. At 90 feet long, 120 feet wide and 30 feet deep, the superlift was among the largest of the 162 that comprise Gerald R. Ford.

"This is among the top five largest superlifts in terms of dimension," said Rolf Bartschi, NNS' vice president of the CVN 78 Program. "What makes this lift especially impressive is that the unit was erected over the rudders already positioned in the dry dock. Precision is of utmost importance in shipbuilding, and our shipbuilders went to great lengths to construct this lift and successfully hoist it into place."

Gerald R. Ford represents the next generation of aircraft carriers. The Ford class features a new nuclear power plant, a redesigned island, electromagnetic catapults, improved weapons movement, an enhanced flight deck capable of increased aircraft sortie rates, and growth margin for future technologies and reduced manning. Gerald R. Ford's keel was laid Nov. 14, 2009, and the christening will occur in 2013 with delivery to the U.S. Navy in 2015. 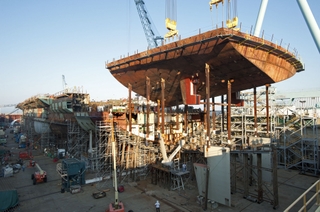