NEWPORT NEWS, Va., May 9, 2011 (GLOBE NEWSWIRE) -- Huntington Ingalls Industries (NYSE:HII) today welcomed the crew of the newest Virginia-class submarine, California (SSN 781), as it moved aboard to prepare for the crew's first meal Tuesday in the ship's galley.

California, the eighth ship of the class and named to honor the "Golden State," is in the final stages of construction and testing at HII's Newport News shipyard. Upon delivery to the Navy in 2011, California will be the most modern and sophisticated attack submarine in the world, providing undersea supremacy well into the 21st century. The submarine's next significant construction milestone is initial sea trials, an aggressive series of operational tests that demonstrate the submarine's capabilities.

"The combined shipbuilder and Navy team worked together to achieve this important milestone," said Becky Stewart, vice president of Newport News Shipbuilding's submarine program. "Once the crew moves onboard, the submarine comes to life and begins its final journey toward becoming an operational platform. It's an exciting time for the entire California team as we move one step closer to delivery."

HII, one of only two companies capable of designing and building nuclear-powered submarines, is teamed with General Dynamics Electric Boat to build Virginia-class submarines. California will be the first Virginia-class submarine delivered by Newport News Shipbuilding under the company's new name. Newport News Shipbuilding is a division of HII, which was known as Northrop Grumman Shipbuilding until it began operating March 31 as an independent, publicly traded company. 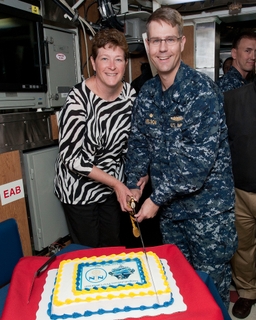