New York is unique in that its bow stem contains seven-and-a-half tons of steel recovered from the World Trade Center following the terrorist attacks of Sept. 11, 2001.

Principal speaker Gordon England, deputy secretary of defense, spoke on how LPD 21 will help fight the global war on terrorism. "This fight brought to our shores that day is a struggle that will require strong, steady and sustained leadership with the enduring need for a strong military and ships like New York," England said.

"In the long years of this warship's service life, she will help defend America and our allies and friends. Through this ship's service, generations will proudly honor all of the fallen angels of 9/11," said General Robert Magnus, assistant commandant of the U.S. Marine Corps.

England's wife, Dotty, served as the ship's sponsor and broke a champagne bottle across the bow, honoring the city and state of New York while proclaiming, "I christen thee New York. May God bless this ship and all who sail on her."

New York is the fifth amphibious transport dock ship in the San Antonio class. The LPD 17 San Antonio Class is the newest addition to the Navy's 21st-Century amphibious assault force.

"It's inspiring to see the wreckage of Ground Zero transformed into a magnificent and mighty Navy vessel that will patrol our homeland, protect our nation, guard our safety, defend freedom and defend liberty," said Vito Fossella, United States Representative for New York, 13th District.

"Ships like New York allow our Navy, Marine Corps and this country to take the fight forward and be globally positioned so that what happened on September 11 does not happen again," said U.S. Navy Admiral Gary Roughead, chief of naval operations. "New York will forever conjure the valor, the sacrifice, the heroism and the tenacity of that city, that state and our nation."

Speakers invoked the ship's motto, 'Never Forget,' throughout the ceremony.

"Northrop Grumman has a legacy of building great ships for the U.S. Navy," said Ronald D. Sugar, Northrop Grumman chairman and chief executive officer. "It is a legacy that is especially fitting for this ship, which we christen today - no matter how many times she carries young Americans into battle, we can be confident that, like her namesake, New York, even if she suffers damage, she will never know defeat."

Cmdr. F. Curtis Jones of Binghamton, N.Y., is the prospective commanding officer of the ship and will lead the crew of 361 officers and enlisted personnel.

"The ship in front of you - made from thousands of tons of steel, seven-and-a-half of those from the Twin Towers - symbolizes thousands of stories, stories about the heroes of 9/11," said Mike Petters, corporate vice president and president of Northrop Grumman Shipbuilding. "The police officers, the firefighters, and the people who lost their lives and their families have very different stories, yet they are linked together by history."

The 684-foot, 105-foot-wide LPD transport dock ships are used to transport and land U.S. Marines, their equipment and supplies by embarked air cushion or conventional landing craft and Expeditionary Fighting vehicles, amphibious assault vehicles, augmented by helicopters or vertical take off, and landing aircraft such as the Osprey. The ships will support amphibious assault special operations, or expeditionary warfare missions throughout the first half of the 21st century. 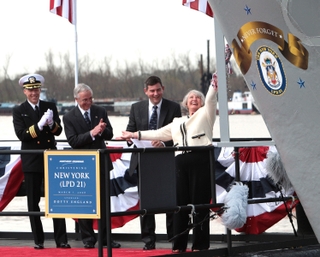