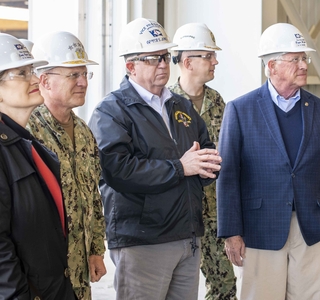 “Adm. Gilday’s visit today gave us the opportunity to show him in great detail the magnificent shipbuilding facility improvements we’ve made at Ingalls over the past few years,” Ingalls President Brian Cuccias said. “Along with Mississippi’s two U.S. Senators, Sen. Roger Wicker and Sen. Cindy Hyde-Smith, the CNO got a firsthand look at all four classes of ships we are building for the Navy and Coast Guard. Visits like this give our outstanding team of shipbuilders the opportunity to show off their craftsmanship and commitment to our Navy. Ingalls currently has 10 Navy ships, and three Coast Guard cutters in various stages of production.”

Adm. Gilday, who was sworn in as the Nation’s 32nd chief of naval operations in August 2019, also met with crewmembers of ships currently under construction or modernization at Ingalls.

“To build the most ready and lethal fleet we can, we’re working side by side with Congress and industry,” Gilday said. “Today’s visit is an important opportunity to see our sailors and the work being done here at HII’s shipyard.” 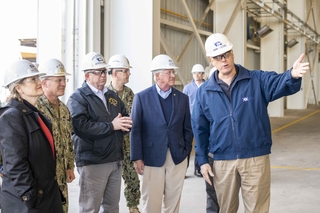