NEWPORT NEWS, Va., Sept. 22, 2006 (PRIMEZONE) -- In preparation for the christening and launching next month, Northrop Grumman Corporation (NYSE:NOC) has finished painting the hull for the nation's newest aircraft carrier, George H. W. Bush (CVN 77). The company has also flooded the dry dock where the ship was assembled since the keel was laid in May 2003.

Northrop Grumman's Newport News sector used more than 50,000 gallons of paint over a four-month period to paint the carrier's massive hull. On September 15, the company began to flood the dry dock, marking the first time the carrier has been in the water. This controlled process consists of slowly filling the dry dock with more than 85 million gallons of water over several days.

Northrop Grumman will christen George H. W. Bush (CVN 77) on October 7. The ship's namesake and 41st President of the United States, George H. W. Bush, is scheduled to attend the ceremony along with his wife Barbara and their daughter, Doro Bush Koch. Koch serves as the ship's sponsor and will do the traditional honor of breaking a bottle of American sparkling wine across the ship's bow during the ceremony. On October 8, shipbuilders will launch the carrier into the James River where outfitting and testing of the ship's systems will continue until the ship is delivered to the U.S. Navy in late 2008. 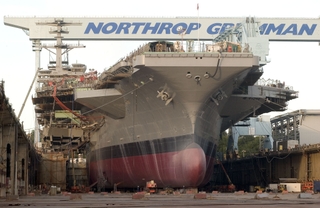