The Green Bay christening is a key milestone as the ship progresses toward becoming an integral asset of the 21st century Expeditionary Forces, where it will help to preserve national security and to project power wherever and whenever needed.

"Today, Northrop Grumman Ship Systems and the thousands of employees who are the heart of the company are in the process of creating a powerful new combat ship for the world's greatest Navy," said Gen. Robert Magnus, assistant commandant of the U.S. Marine Corps.

Rose Mary Magnus, the ship's sponsor and wife of Gen. Magnus, smashed a bottle of champagne across the bow of the new ship, which was followed by a large roar of applause from the approximately 700 guests who attended.

Speakers throughout the day referenced the community's professional football team, the Green Bay Packers, and the special camaraderie and teamwork associated with the National Football League's most storied franchise.

Bart Starr, former Green Bay Packer quarterback and MVP of the NFL's first two Super Bowls, praised the shipbuilders of Northrop Grumman in a video statement, and compared them to his Green Bay Packers.

"You take a large, successful, challenged, committed group of people, and you can build a truly successful team," said Starr. "We were a part of that in Green Bay. The years we played under Coach Vince Lombardi, we only lost one playoff game, our first one together against the Eagles in 1960. I always remember him saying after that game, 'We won't ever lose another one.' These wonderful people who are building these great ships have that same kind of commitment. They're not remotely interested in being just good; they want to be excellent. Lombardi would have loved them. . . ."

"Five thousand shipbuilders come to this yard every day to build the most sophisticated ships in the world -- Green Bay being the latest example," said Philip Teel, president, Northrop Grumman Ship Systems. "Shipbuilders, many of whom still live in trailers or somebody else's home or in our own Camp Katrina, come to work every day to get these ships completed and into the hands of the Navy/Marine Corps Team. Sometimes I think the nation forgets, perhaps, what caliber of citizens work in these yards for the country's security. They are all great Americans, great patriots, and I'm personally proud to work with them today."

Green Bay will be the fourth amphibious transport dock ship of the San Antonio class. It will be used to transport and land Marines, their equipment and supplies by embarked air cushion, conventional landing craft, or Expeditionary Fighting Vehicles augmented by helicopters or vertical take-off and landing aircraft.

James J. Schmitt, mayor of Green Bay, Wis., remarked, "Ten years ago, our community was down here to celebrate a Super Bowl victory, and today, we celebrate a Super Bowl of Navy vessels . . . it's a commemoration of an enduring legacy of excellence for the City of Green Bay and a celebration of a new legacy that's going to be created by this ship that is graced with our name."

Current Navy plans call for Northrop Grumman to build at least nine ships in the class. Northrop Grumman delivered the first ship, USS San Antonio (LPD 17), last summer, and the ship was commissioned in January of this year.

Technological and design advances in the San Antonio class provide benefits such as enhanced survivability, state-of-the-art command-and-control capability, modernized weapons stations and enhanced ergonomics, which greatly improves quality of life at sea for the sailors and Marines. These include "sit-up" berths that allow occupants to sleep horizontally or sit up vertically to read or write. Each berth also has 40 percent more storage space than other types of berths.

The ship will have a crew of 360 officers and enlisted Navy personnel and is capable of embarking a landing force of up to 800 Marines. The ship has a navigational draft of 23 feet and displaces approximately 25,000 tons. Four turbo-charged diesel engines power the ship to sustained speeds of 22 knots. The ship is scheduled to be delivered in the first quarter of 2008.

Allison Stiller, U.S. Navy deputy assistant secretary for ships, commended both the shipbuilders, and those who will crew her, by saying, "Today's christening is more than just the birth of a United States fighting ship. Today's christening memorializes the courage and fortitude of many brave Americans. I am referring to you, both the employees of Northrop Grumman Ship Systems and the men and women of the Gulf Coast Navy family." 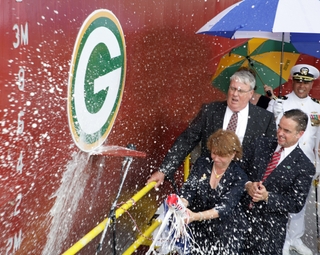