NEWPORT NEWS, Va., May 23, 2011 (GLOBE NEWSWIRE) -- Gerald R. Ford (CVN 78), the lead ship in the new class of U.S. Navy super carriers, took another step toward completion Saturday as Huntington Ingalls Industries (NYSE:HII) erected a 945-ton superlift near the stern of the ship. Gerald R. Ford is being built using modular construction, a process where smaller sections of the ship are welded together to form large structural units called superlifts. These superlifts are pre-outfitted and then lifted into the construction dry dock with the shipyard's 1050-metric ton crane.

The superlift erected on Gerald R. Ford Saturday contains a diesel generator room, a pump room, an oily water waste pump room, 16 complete tanks and 18 partial tanks that will be completed when the superlift is welded to the rest of the ship. The superlift is assembled from 18 smaller structural units supplied by the steel fabrication and assembly division. It is one of 162 total superlifts that comprise the ship.

"This superlift has been constructed over the past 16 months by our talented shipbuilders," said Rolf Bartschi, vice president of the CVN 78 Program. "The quality of their work and the pride they have in constructing this great ship is inspirational. It is one of the heaviest superlifts we will construct and lift into the dock."

Gerald R. Ford represents the next-generation class of aircraft carriers. The Ford class features an enhanced flight deck with increased aircraft sortie rates, improved weapons movement, a redesigned island, a new nuclear power plant, electromagnetic catapults and growth margin for future technologies and reduced manning. The Gerald R. Ford's keel was laid Nov. 14, 2009, and the christening will occur in 2013 with delivery to the U.S. Navy in 2015. Long-lead material procurement for the second ship of the class, the currently unnamed CVN 79, began in 2009. 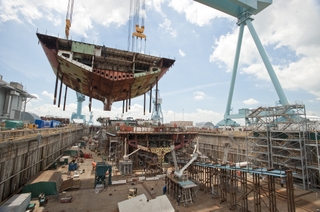