PASCAGOULA, Miss., Oct. 18, 2005 (PRIMEZONE) -- A photo has been released today by Northrop Grumman Corporation (NYSE:NOC) and is available at http://media.primezone.com/noc/

The first National Security Cutter (NSC 1) fabrication unit to be lifted into place since Hurricane Katrina swept through the Gulf Coast is pictured here at Northrop Grumman's Pascagoula, Miss., shipyard on Monday, Oct. 17. The National Security Cutter is being developed by Integrated Coast Guard Systems, a joint venture between Northrop Grumman and Lockheed Martin. It is designed to be the flagship of the Deepwater fleet, capable of meeting all maritime security mission requirements of the U.S. Coast Guard. It will be the largest and most technically advanced class of cutter in the Coast Guard. Construction of the NSC 1 began in September 2004 at Northrop Grumman's Ship Systems sector in Pascagoula, and the ship is expected to be delivered to the Coast Guard in 2008. Eight of these ships are planned to be built for the Coast Guard's fleet by 2017. 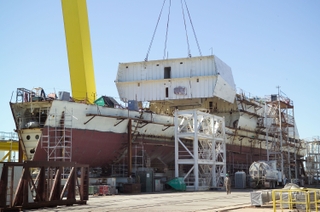