"It is only fitting the first cutter built as part of the largest recapitalization effort in the Coast Guard's history is named to honor one of the pioneers of the organization," said Jamie Anton, vice president of the Deepwater program for Northrop Grumman. "Commodore Bertholf is an American hero and an icon for every member of the U.S. Coast Guard. This ship will represent -- just as Bertholf did nearly a century ago -- the future of this organization and will present a platform that will set the standards for many years to come in homeland defense."

Bertholf was born on April 9, 1866, in New York City. As a Second Lieutenant with the U.S. Revenue Cutter Service, Bertholf volunteered for an arctic rescue mission aboard the USRC Bear. When the ice-locked sea off the coast of Alaska became impassable, he joined others on a 1,600 mile overland trek from the Bering Sea to Point Barrow, the northernmost Alaskan point. Once there, his expedition rescued over 200 American whalers facing starvation because their fleet of vessels had become trapped and damaged by arctic ice.

The NSC that bears his name will be a 418-foot ship with a 4,300-ton displacement at full load. Powered by a twin-screw combined diesel-and-gas turbine-power propulsion plant, the NSC is designed to travel at 28 knots max speed. The cutter will include an aft launch and recovery area for two rigid-hull inflatable boats; a flight deck to accommodate a range of rotary-wing manned and unmanned aircraft and state-of-the-art command-and-control electronics.

Deepwater is a critical multi-year, multi-billion dollar program to modernize and replace the Coast Guard's aging ships and aircraft, and improve command-and-control and logistics systems. It is the largest recapitalization effort in the history of the Coast Guard.

Northrop Grumman Ship Systems includes primary operations in Pascagoula and Gulfport, Miss.; and in New Orleans and Tallulah, La., as well as in a network of fleet support offices in the U.S. and Japan. Northrop Grumman Ship Systems is one of the nation's leading full-service systems companies for the design, engineering, construction and life-cycle support of major surface ships for the U.S. Navy, Coast Guard and international navies. 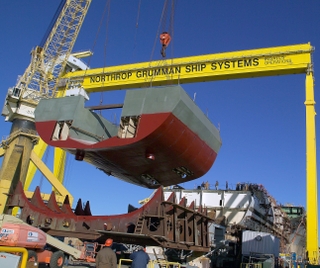