INGLESIDE, Texas, Jan. 16, 2006 (PRIMEZONE) -- "The price of freedom remains painfully high," former President George H.W. Bush said here on Saturday, "but with faith and vigilance, and the vision and leadership that only the United States can provide, freedom prevails. Everyone who helped design and build this ship; everyone who will serve aboard this ship, is playing a vital role in protecting America's interests around the globe."

The 41st President of the United States delivered the principal address as the U.S. Navy/Marine Corps team's newest ship, USS San Antonio (LPD 17), was commissioned at Naval Station Ingleside. More than 7,000 guests were on hand for the traditional naval ceremony in which the Northrop Grumman Corporation (NYSE:NOC)-built amphibious transport dock ship formally joined the U.S. Atlantic Fleet. USS San Antonio will be homeported in Norfolk, Va.

USS San Antonio joins the "great arsenal of freedom," Bush said, "and in so doing helps make sure that my grandkids and yours grow up in a much safer world."

The ship, one of the most technologically advanced and sailor-friendly ships ever built, was placed in commission by Donald C. Winter, newly appointed Secretary of the Navy. Secretary Winter noted, "The fortunes of our great nation will, in large measure, rest on our ability to defend the blessings of liberty that we have cherished from the day of our independence. This ship...this superb technological marvel...will enable our naval forces to continue to provide the global access, the persistent presence and non-intrusive footprint that have proven to be indispensable in support of U.S. interests."

Sen. Kay Bailey Hutchison, (R-Texas) served as ship's sponsor and ordered the 360 officers and enlisted crewmembers to "man our ship and bring it to life" at the peak of Saturday's ceremony. The crew responded with a hearty "Aye aye, ma'am," and double-timed through the audience, and onto the decks of the new ship.

Sen. Hutchison noted the new ship's heritage as "representing more than a city. It is the home of the Alamo, where many brave Texans died rather surrender to an enemy that fought to take away their freedom."

The LPD 17 class, 684 feet long and 105 feet wide, will replace the functions of the LPD 4, LSD 36, LKA 113 and LDT 1179 classes of amphibious ships. This new class of ship affords the U.S. Navy's Expeditionary Strike Group the technology and flexibility to launch and recover two amphibious Landing Craft, Air Cushion Landing Craft (LCAC), operate an array of rotary-wing aircraft, as well as the ability to carry and launch 14 Marine Corp's Expeditionary Fighting Vehicles.

"I am honored today to represent American industry," said Philip A. Teel, president of Northrop Grumman Ship Systems, "not just Northrop Grumman, but all those men and women who come to work every morning committed to building the most sophisticated and capable ships in the world. These national treasures, our shipbuilders, produce little miracles every day that ultimately result in a big miracle -- like this great ship behind us.

"Today," Teel continued, "we celebrate the leap to an entirely new generation of ships and pay homage to the proud shipbuilders who built LPD 17 and to those men and women in uniform, sailor and Marine alike, who will take her to sea."

Technological and design advances in the LPD 17 class provide benefits such as enhanced survivability, state-of-the-art command-and-control capability, modernized weapons stations and enhanced ergonomics, which greatly improves quality of life at sea for the sailors and Marines. This includes "sit-up" berths that allow occupants to sleep horizontally or sit up vertically to read or write. Each berth also has 40 percent more storage space than other type berths. The ship is capable of embarking a landing force of up to 800 Marines. LPD 17 has a navigational draft of 23 feet and displaces approximately 25,000 tons. Four turbo-charged diesels power the ship to sustained speeds of 24 knots.

Capt. Jonathan M. Padfield, of Salt Lake City, Utah, is the ship's first commanding officer. "The future of expeditionary warfare is here," he said in accepting command. "USS San Antonio is a remarkable ship. Her design is amazing, her capabilities without equal. Her crew is without peer. We are ready and able to pick up the banner of freedom."

Capt. Padfield then brought his 15-month old son, Lee, to the podium. "Children like Lee are our future," he said. "This is why we do what we do...from the heroes of the Alamo in 1836, to the future heroes of San Antonio...this is our mission. Viva San Antonio!"

Northrop Grumman will build at least nine ships in the class and the first five are under contract. New Orleans (LPD 18), Mesa Verde (LPD 19), Green Bay (LPD 20) and New York (LPD 21) are each in various stages of construction at all three locations of Northrop Grumman Ship Systems in New Orleans, and Pascagoula and Gulfport, Miss.

Northrop Grumman Ship Systems includes primary operations in Pascagoula and Gulfport, Miss.; and in New Orleans and Tallulah, La., as well as in a network of fleet support offices in the U.S. and Japan. Northrop Grumman is one of the nation's leading full-service systems companies for the design, engineering, construction and life-cycle support of major surface ships for the U.S. Navy, U.S. Coast Guard and international navies. 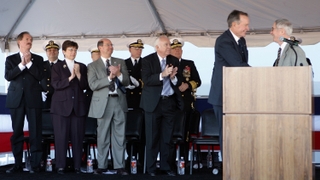