PASCAGOULA, Miss., Oct. 4, 2004 (PRIMEZONE) -- "Our Navy needs not only to be prepared to address traditional missions, but also to be equipped for the new enemies we face," proclaimed U.S. Sen. Thad Cochran (R-Miss), as principal speaker during the christening of the Northrop Grumman (NYSE:NOC)-built Aegis guided missile destroyer Forrest Sherman (DDG 98), held Saturday, October 2, 2004 at the company's Ship Systems sector.

Sen. Cochran continued by honoring U.S. Navy sailors and Northrop Grumman shipbuilders saying, "We all can be proud to say that we have the best Navy in the world. Our challenge is to be sure it is maintained by providing the very best ships and technology to the Sailors who defend our nation. From Spruance Class destroyers to the LHD amphibious assault ship, Mississippi shipbuilders have helped make our Navy the best in the world."

More than 1,000 guests attended the christening of DDG 98, named to honor Navy Adm. Forrest Percival Sherman (1896-1951). Sherman served as chief of Naval Operations from 1949 until his death in July 1951, and was the youngest man ever to serve in this role.

"Admiral Sherman represented the very best of our great Navy, leading with extraordinary courage and conviction during some of our nation's darkest hours, whether from the flight deck of an aircraft carrier or the hallowed halls of the Pentagon in times of war and in times of peace," said Rear Adm. Charles S. Hamilton II, USN, program executive officer, ships. "Today, I am representing the program executive office responsible for orchestrating the efforts of an unbeatable Navy-Industry team, who designs, develops, builds and supports these superb warships. Together, you are truly building freedom, one great ship at a time."

"Northrop Grumman is committed to continued excellence and to maintaining its reputation as the number one provider of modern surface combatants, Coast Guard cutters and expeditionary warfare platforms for our uniformed sea services," said Philip A. Dur, president, Northrop Grumman Ship Systems. "We are committed to shortening the build-cycle of the ships we have under contract, and to this end, we are, in partnership with the State of Mississippi, investing almost $300 million to upgrade our facilities in Pascagoula and in Gulfport."

The 509.5-foot, 9,300-ton Forrest Sherman has an overall beam of 66.5 feet, and a navigational draft of 31.9 feet. Four gas turbine propulsion plants will power the ship to speeds above 30 knots. DDG 98 will be crewed with a crew of approximately 383 officers and enlisted personnel.

Upon completion of outfitting, as well as dockside and at-sea trials and crew training, DDG 98 will be commissioned USS Forrest Sherman in 2006, and will be an element of the U.S. Atlantic Fleet. Navy Cmdr. Michael G. Van Durick, a Scranton, Penn. native and 1986 graduate of the U.S. Naval Academy, is the ship's prospective commanding officer.

One previous ship, USS Forrest Sherman (1955-1982) was named in his honor, earned a Navy Unit Commendation and performed distinguished service off Lebanon, Quemoy-Matsu, Cuba, and in the Indian Ocean. 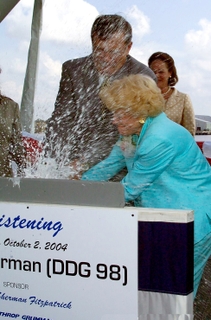