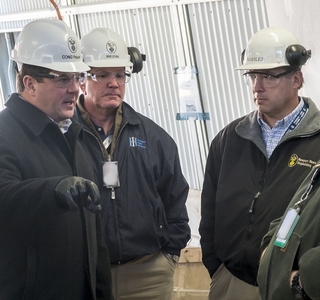 The visit provided an opportunity for Palazzo to see nuclear shipbuilding at Newport News and understand the value that Mississippi suppliers contribute to ship construction in Newport News. Palazzo’s visit included a tour of aircraft carrier Gerald R. Ford (CVN 78), which is about 85 percent complete and scheduled for delivery in 2016.

“I was pleased to spend some time with the shipbuilders of Newport News Shipbuilding today,” Palazzo said. “Along with Ingalls Shipbuilding in my congressional district, the shipbuilders are building an impressive array of warships to serve our nation for many years to come. I was also pleased to get a close look at the critical role of Mississippi’s supplier base in the construction and maintenance of aircraft carriers and submarines. Shipbuilding is truly a national endeavor with contributions from all 50 states, and I look forward to continuing to work with my colleagues in Congress to support a strong Navy and Coast Guard.”

Palazzo serves on the House Armed Services Committee and the Subcommittee on Seapower. He is also a chief deputy whip of the Republican Conference. In addition to Ingalls Shipbuilding, Palazzo’s district includes Keesler Air Force Base, the Naval Construction Battalion Center (NCBC) in Gulfport and NASA’s John C. Stennis Space Center. The congressman was in the Hampton Roads area visiting NCBC sailors who are under quarantine following service in West Africa.

Ken Mahler, Newport News Shipbuilding’s vice president, Navy programs, met with Palazzo during his visit. “We always welcome the opportunity to showcase our shipbuilders and the complex warships they build,” he said. “Congressman Palazzo understands our industry and the challenges we face given the current defense budget situation. And even though the ships built at our sister yard in Mississippi are different from what we build here at Newport News, they are built to support our military and they are built by great shipbuilders in each shipyard.”

Huntington Ingalls Industries designs, builds and manages the life-cycle of the most complex nuclear- and conventionally powered ships for the U.S. Navy and Coast Guard. For more than a century, HII’s Newport News and Ingalls shipbuilding divisions in Virginia and Mississippi have built more ships in more ship classes than any other U.S. naval shipbuilder. HII also provides engineering and project management services expertise to the commercial energy industry, the Department of Energy and other government customers. Headquartered in Newport News, Va., HII employs approximately 39,000 people operating both domestically and internationally. For more information, visit: 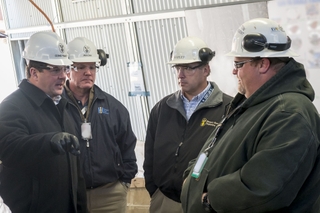