HII President and CEO Mike Petters accompanied the senators on the shipyard tour, which included visits in aircraft carrier and submarine construction facilities and a tour of aircraft carrier Gerald R. Ford (CVN 78). Ford is about 62 percent overall complete. The ship's christening is scheduled for Nov. 9.

"The sophistication and quality of work that is done at Newport News Shipbuilding on a daily basis always makes a big impression on me," said Kaine, who was elected to the U.S. Senate in 2012 and serves as a member of the Senate Armed Services Committee. "Given his critical role on the Defense Appropriations subcommittee, I was glad to invite my friend Senator Durbin to meet with Virginia shipbuilders and discuss key issues regarding the nation's submarine and carrier programs."

Durbin, who was first elected to the Senate in 1996, is the senior Senator from Illinois. He serves as the assistant majority leader, the second highest-ranking position in the Senate. Durbin sits on the Senate Judiciary, Appropriations, Foreign Relations and Rules committees. He is chairman of the Judiciary Committee's Subcommittee on the Constitution, Civil Rights and Human Rights, as well as the Appropriations Committee's Defense subcommittee.

The Illinois senator spoke to reporters after the tour. In speaking about the defense budget and its impact on employees at NNS, he said, "We've got to make certain they have continuity of work, not just so that the largest private employer in the state is maintaining its workforce, but that we have these skilled shipbuilders available when we need them—and we need them virtually all of the time."

Petters said the visit by the senators "clearly underscores their understanding of the importance of our industry to America's defense and economic health. While the tour at NNS rightly focused on aircraft carriers and submarines, the accompanying discussion encompassed the HII portfolio of ships and what they contribute to our nation, to include destroyers, amphibious assault ships and National Security Cutters." 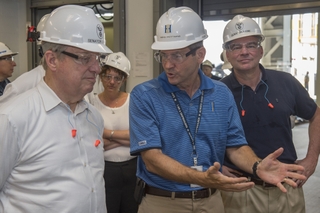