Petters shared with students his views on leadership, talent development and the importance of having great people. When asked what he has learned in his career as a leader, Petters said success is not the result of products or processes, but the efforts of people.

"The most important thing done in business is done through your people," he said.

The event, which was led by two MBA students who asked Petters questions on behalf of the group of 60 in attendance, was co-hosted by the Darden Military Association, a group that assists members in leveraging former and current military experiences to enhance career opportunities within the private sector and builds esprit de corps and camaraderie within the Darden community. When asked for advice for students working on their MBAs, Petters told the group, "Besides being an expert in your field, you also need to understand the language of business."

Petters earned a bachelor's degree in physics from the U.S. Naval Academy in 1982 and went on to serve as an officer on the submarine USS George Bancroft (SSBN 643) and in the U.S. Naval Reserve. In 1993, he earned an MBA from the College of William and Mary. He joined Newport News Shipbuilding in 1987 and held a number of increasingly responsible positions throughout the organization, including vice president of aircraft carrier programs, vice president of contracts and pricing, vice president of human resources, and president of Northrop Grumman Newport News and Northrop Grumman Shipbuilding. He assumed the role of president and CEO for HII on March 31, 2011. 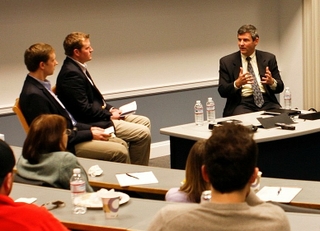