McKeon praised the work of the shipbuilders in a media briefing after the tour. "My job—our job—is to see that those put in harm's way have everything they need to carry out their mission and return home safely," he said. "We should not back off one bit from supporting the things that they need, and that starts with shipyards."

McKeon, when asked by a reporter about the Navy's 11 carrier strike groups and speculation that the number could be reduced, responded, "I don't want to see it go below that until I know the world is a safer place."

The delegation received a behind-the-scenes look at progress on the aircraft carrier Gerald R. Ford (CVN 78) and investment being made to accommodate the new two-per-year Virginia-Class Submarine program. They also received a brief on the refueling and complex overhaul (RCOH) work being done on the aircraft carrier USS Theodore Roosevelt (CVN 71).

"We are honored to host Congressman McKeon, our Congressional delegation and Navy leadership, whose continued support enables our 20,000 shipbuilders to continue designing, building and maintaining our nation's future fleet of aircraft carriers and submarines," said NNS President Matt Mulherin. "Today's visit enabled them to see first-hand the complexities and technologies associated with building our nation's nuclear-powered warships and to further understand the value shipbuilding and the associated supplier industrial base brings in terms of jobs here in Newport News and across the U.S." 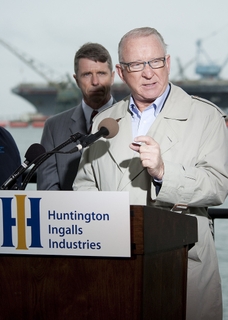