“The National Security Cutter Program is vital to our Coast Guard, our country and to Ingalls Shipbuilding,” said Ingalls Shipbuilding President Brian Cuccias. “Today, we lay the foundation upon which this great ship will be built. The Midgett, like her sister ships, is being built to the highest quality standards with outstanding cost and schedule performance, and the NSC team is energized to make this one the best yet.” 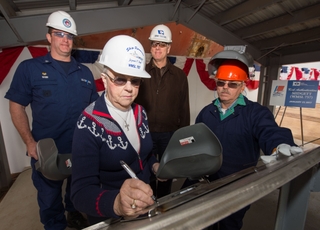 Jazania O’Neal, Midgett’s granddaughter and the ship’s sponsor, spoke today, proclaiming Midgett’s keel to be “truly and fairly laid.” O’Neal’s initials were welded onto a keel plate by Jack Beard, a structural welder at Ingalls.

“For my grandfather to be memorialized as the namesake for this ship, in the company of the seven other Legend-class ship namesakes, surpasses validation of our heritage on a worldwide scale,” O’Neal said. “We wish you well throughout the remaining construction of this fine ship, and we look forward to seeing you at the christening.”

Ingalls has delivered six NSCs to the U.S. Coast Guard, and two more are currently under construction. In addition to Midgett, the seventh NSC, Kimball (WMSL 756), is scheduled to deliver in 2018. In December 2016, Ingalls received a $486 million fixed-price incentive contract from the U.S. Coast Guard to build a ninth National Security Cutter.

“The entire Coast Guard team is appreciative of the Ingalls Shipbuilding team,” said Capt. Christopher Webb, commanding officer, U.S. Coast Guard Project Resident Office Gulf Coast. “We rely on your talents, skills and masterful crafts to provide the NSCs we utilize to complete our many missions around the world. NSC 8 reached its start fabrication milestone just over 14 and a half months ago and remains ahead of production schedule. Most importantly, I look forward to seeing the continued emphasis on quality, while maximizing NSC completeness improvements indicative of the planning, hard work, integration and shipbuilding excellence here.”

Legend-Class National Security Cutters are the flagships of the U.S. Coast Guard. They are the most technologically advanced ships in the Coast Guard’s fleet, with capabilities for maritime homeland security, law enforcement and national security missions. NSCs are 418 feet long with a 54-foot beam and displace 4,500 tons with a full load. They have a top speed of 28 knots, a range of 12,000 miles, an endurance of 60 days and a crew of 120. The Legend class of cutters plays an important role in enhancing the Coast Guard’s operational readiness, capacity and effectiveness.