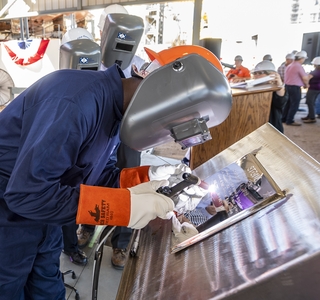 Demetrica Hawkins, a structural welder at Ingalls Shipbuilding, welded ship sponsor Laura Cavallo’s initials onto a steel plate, signifying the keel of NSC 9 as being “truly and fairly laid.” The plate will remain affixed to the ship throughout its lifetime. Photo by Derek Fountain/HII

“NSCs are essential to the Coast Guard and play a significant role in making America safer and stronger,” said Kari Wilkinson, Ingalls’ vice president, program management. “As Americans and as shipbuilders, this team understands that every day is an important day in completing and delivering this asset to the Coast Guard. It is a mission we hold close and that drives the NSC team to raise the bar from ship to ship.”

Laura Cavallo, the great niece of the namesake, will serve as the ship’s sponsor.

Demetrica Hawkins, a structural welder at Ingalls, welded Cavallo’s initials onto a steel plate, signifying the keel of NSC 9 as being “truly and fairly laid.” The plate will remain affixed to the ship throughout its lifetime.

“As I’ve stated previously, the National Security Cutter is game-changing,” said U.S. Coast Guard Capt. Travis Carter, commanding officer, Gulf Coast. “The entire Coast Guard team is appreciative of the hard work and dedication of the men and women at Ingalls Shipbuilding. The Coast Guard and the nation depend on your skills to provide the ships we use to complete our missions around the world. I look forward to seeing the continued example of your hard work in the next great ship.”

The ship is named in honor of former U. S. Coast Guard commander Elmer “Archie” Fowler Stone. Stone was born in Livonia, New York, and grew up in Norfolk, Va. He became a cadet at the Revenue Cutter Service School of Instruction on April 28, 1910. On April 10, 1917, Stone became the Coast Guard’s first aviator upon graduating from flight training at Pensacola, Fla. In 1919 Stone was one of two pilots to successfully make a transatlantic flight in a U.S. Navy seaplane, NC-4. Stone died of a heart attack on May 20, 1936, while inspecting a new patrol plane at the Air Patrol Detachment in San Diego.

Ingalls has delivered six NSCs, the flagship of the Coast Guard’s cutter fleet, designed to replace the 12 Hamilton-class high-endurance cutters that entered service in the 1960s.

The Legend-class NSC is capable of meeting all maritime security mission needs required of the high-endurance cutter. The cutter includes an aft launch and recovery area for two rigid hull inflatable boats and a flight deck to accommodate a range of manned and unmanned rotary wing aircraft. It is the largest and most technologically advanced class of cutter in the U.S. Coast Guard, with robust capabilities for maritime homeland security, law enforcement, marine safety, environmental protection and national defense missions. This class of cutters plays an important role in enhancing the Coast Guard’s operational readiness, capacity and effectiveness at a time when the demand for their services has never been greater. 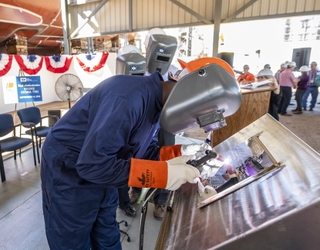