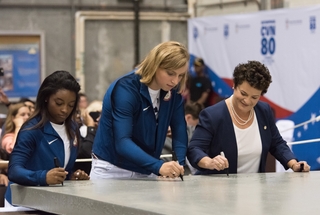 “Much like U.S. athletes who represent the United States around the world displaying patriotism, pride and strength, so do the ships of our nation,” Biles said. “My father served in the U.S. Air Force for over 21 years and taught me discipline, determination and dedication to achieve my goals, and these same values are on display as these advanced ships are built here.”

Newport News is performing the work under an advance fabrication contract the shipyard was awarded earlier this year. Award of the CVN 80 detail design and construction contract is anticipated in 2018. Construction is currently underway on the second ship of the class, John F. Kennedy (CVN 79), with more than 50 percent of the structural units already erected.

“We really, truly would not be able to compete at the level that we do without the freedom that we have, and that’s something we promise we will never take for granted,” Ledecky said. “We’re excited to cut this steel today and start this process.”

Newport News Shipbuilding President Jennifer Boykin said CVN 80’s construction will incorporate greater innovation and efficiency. “With this ship, we will ‘boldly go where no one has gone before,’” she said. “She will be built using digital technology rather than traditional paper work packages and drawings. We will build more of this ship indoors, in new facilities so that our people have more opportunities to work under cover and out of the weather. CVN 80 will revolutionize how we build ships, just as her predecessor, CVN 65—the world’s first nuclear-powered aircraft carrier—revolutionized our industry.”

CVN 80 will be the third Gerald R. Ford-class aircraft carrier. Designed to replace Nimitz-class carriers, the Ford class features a new nuclear power plant, a redesigned island, electromagnetic catapults, improved weapons movement, an enhanced flight deck capable of increased aircraft sortie rates, and growth margin for future technologies. Each Ford-class ship will operate with a smaller crew than a Nimitz-class carrier and will provide $4 billion in total ownership cost savings for the Navy. Aircraft carriers provide sovereign, mobile U.S. territory and are a visible symbol of U.S. power. They are the centerpiece of our nation’s security strategy and support and protect the global economy through the protection of sea lanes around the world. 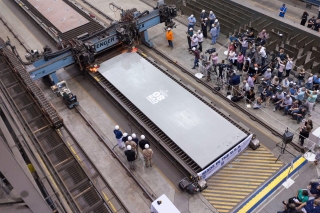