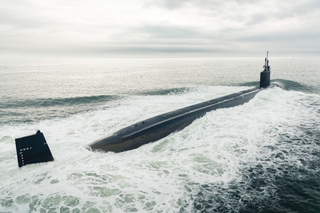 Indiana (SSN 789) was delivered to the U.S. Navy by Newport News Shipbuilding on June 25. Pictured during sea trials in May, the newest Virginia-class submarine will be commissioned later this year. Photo by Matt Hildreth/HII

The future USS Indiana (SSN 789) is the 16th Virginia-class submarine built as part of the teaming agreement with General Dynamics Electric Boat and the eighth delivered by Newport News.

“We are proud to deliver Indiana to the Navy,” said Dave Bolcar, Newport News’ vice president of submarine construction. “For the nearly 4,000 shipbuilders who participated in construction of the boat, there is nothing more important than knowing that this vessel will support the Navy’s missions.”

Indiana, which began construction in September 2012, successfully completed sea trials earlier this month. The vessel will be commissioned later this year.