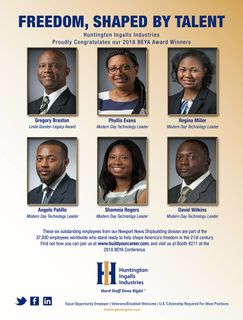 Gregory Braxton, a computer systems security analyst, received the Linda Gooden Legacy Award, which is named after the former president of Lockheed Martin Information Technology. Gooden, who was one of the most respected business leaders in defense and aerospace during her 40-year career, also was BEYA’s 2006 Black Engineer of the Year recipient.

Five other Newport News employees received Modern Day Technology Leader awards, which recognize their efforts in shaping the future of engineering, science and technology. They include: