Chavis Harris, Newport News’ director of ethics, EEO and diversity, received the Dave Barclay Affirmative Action Award, which recognizes efforts to promote affirmative action and advancement within his or her organization in education, job promotion, small-business development and community activities.

Harris has administered classroom instruction on diversity and inclusion to more than 2,200 of Newport News’ first-line supervisors. He also has served as a panel member and facilitator during professional development seminars hosted by the National Society of Black Engineers at Old Dominion and Hampton universities.

Eleven other HII employees received Modern Day Technology Leader awards, which recognize their efforts in shaping the future of engineering, science and technology. They are: 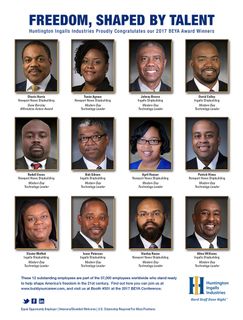