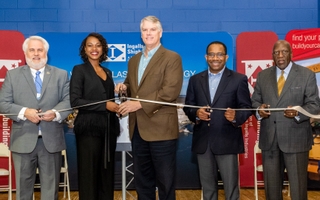 Shipbuilder Academy was established in 2016 at Ingalls’ Maritime Training Academy with a mission to provide enrolled students with a strong foundation in the maritime industry and fill the current industry skills gap. Through a partnership with the Gulfport School District, Ingalls is expanding the program to a new site inside the repurposed Gaston Point Elementary School.

“Ingalls has been a cornerstone of the Gulf Coast for more than 80 years, and we want to provide paths for hiring local talent,” said Brian Cuccias, president of Ingalls Shipbuilding. “A well-trained workforce is so vital to our community’s success that Ingalls has created a proactive approach in helping create meaningful programs that result in job-ready, skilled graduates. These students become a pipeline for Ingalls and other companies along the Gulf Coast.”

In addition to the partnership with Gulfport School District, the new Shipbuilder Academy site received a grant in the amount of $150,000 from the W.K. Kellogg Foundation. The grant is meant to help Gulfport School District and Ingalls increase workforce development and career pathways by expanding Shipbuilder Academy across the Mississippi Gulf Coast.