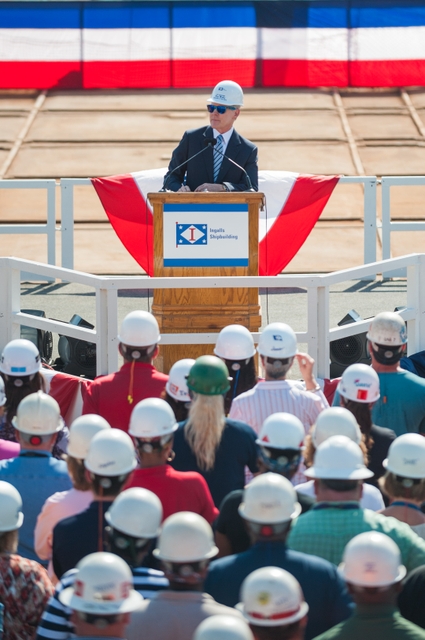 Secretary of the Navy Ray Mabus addressed an audience of shipbuilders during his tour of HII’s Ingalls Shipbuilding division. Photo by Lance Davis/HII

PASCAGOULA, Miss., Nov. 04, 2016 (GLOBE NEWSWIRE) -- Huntington Ingalls Industries (NYSE:HII) hosted Secretary of the Navy Ray Mabus at the company’s Ingalls Shipbuilding division today. Mabus met with members of Ingalls’ leadership and addressed an audience of shipbuilders during his tour of the facilities.

“The people here in Pascagoula build the best warships in the world,” Mabus said. “Nobody comes close to Ingalls. Our sailors and Marines need flexible platforms and a technological edge. I never want to send a sailor or Marine into a fair fight, and as long as we have the ships coming out of Ingalls—as long as we have the high skill, talent and dedication of this workforce—we never will. The Navy and the Marine Corps are the greatest expeditionary fighting force the world has ever known. Thanks to these shipbuilders, it will always be that way.”

“Ingalls is pleased to have had the opportunity to host Secretary Mabus, a native Mississippian, today as he spoke to our workforce about the important role they play in America’s national security,” Ingalls Shipbuilding President Brian Cuccias said. “Building four classes of ships simultaneously takes skill, experience and dedication. Our shipbuilders are committed to providing our military with the most technologically advanced warships in the world. Secretary Mabus’ visit to Ingalls validates that they are doing exactly that.”

“I’m pleased to welcome Secretary of the Navy Ray Mabus back home today to Ingalls Shipbuilding to thank our men and women at Ingalls for their hard work,” Palazzo said. “I was glad to be able to join him in expressing our gratitude that is much deserved to the greatest shipbuilders on earth who build the greatest warships on earth for the greatest military on earth.” 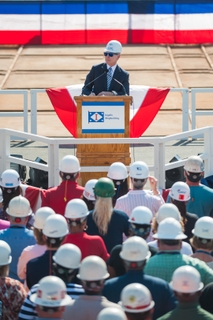