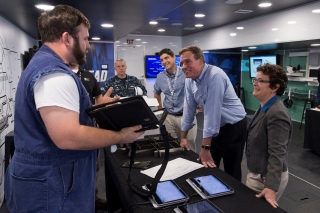 Newport News Shipbuilding President Jennifer Boykin and shipbuilders accompanied Warner on a tour that included a visit to an aircraft carrier construction facility and the main deck of John F. Kennedy, which is about 60 percent structurally complete.

The tour also included a stop at the shipyard’s digital shipbuilding mobile experience, a 53-foot trailer used for training and recruiting next-generation shipbuilders. Inside, the senator experienced how shipbuilders are learning to use digital tools to build Navy ships more efficiently.

“The investments being made in the facilities and new technologies at Newport News Shipbuilding are commendable,” Warner said. “This company understands that technology is a driving force in attracting and retaining tomorrow’s workforce, and its use is helping the shipyard make great strides in building aircraft carriers and submarines more efficiently. I look forward to sharing what I experienced today with my colleagues in Washington so that we can leverage the shipyard’s efforts and help the Navy grow the fleet.”

In his second Senate term, Warner serves on the Senate’s Finance, Banking, Budget and Rules committees as well as the Select Committee on Intelligence, where he is the vice chairman. The former Virginia governor has been a strong advocate for Newport News Shipbuilding, including working to secure funding for the refueling and complex overhaul of the aircraft carrier USS George Washington (CVN 73).

“We are working hard to be a stronger business, a better Navy partner and an employer of choice,” Boykin said. “We enjoyed the opportunity to share some of our digital shipbuilding efforts with Senator Warner, who understands the power of innovation and the need to attract the brightest talent to Virginia. He has always been an important voice on our behalf, and his willingness to take the time to stay informed on our progress underscores his commitment to shipbuilding.”