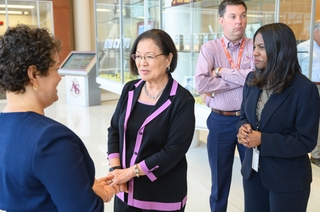 Hirono, the ranking member of the Senate Armed Services’ Subcommittee on Seapower, which oversees all Navy shipbuilding programs, got a behind-the-scenes look at the new construction, overhaul and maintenance of nuclear-powered aircraft carriers and submarines, as well as current facility investments and the integration of digital technology across the shipyard.

Accompanied by Newport News Shipbuilding President Jennifer Boykin and shipbuilders, Hirono visited several areas of the shipyard. Her first stop: The Apprentice School, the cornerstone of the company’s workforce development efforts to train and develop the next generation of shipbuilders. The school is celebrating its 100-year anniversary this year.

“As the ranking member of the Senate Armed Services Subcommittee on Seapower, I respect and appreciate the critical role American shipbuilders such as Newport News Shipbuilding play in protecting American national security and advancing our strategic interests around the world,” Hirono said. “Throughout today’s visit, I saw first-hand the ingenuity and dedication of the shipyard’s workforce and will continue to be a strong advocate in the Senate for our shipbuilders and public shipyards.”

The tour also included a stop at the aircraft carrier USS Gerald R. Ford (CVN 78), which is undergoing post-shakedown availability work, and Dry Dock 12, where shipbuilders are completing shaft installation and hull painting on the aircraft carrier John F. Kennedy (CVN 79) before its scheduled launch this fall. The ship is more than 60% complete overall.

“It has been a privilege to host Senator Hirono today to showcase the skill and craftsmanship of our shipbuilders and the platforms we build to help defend our freedoms,” Boykin said. “We appreciate her interest in our workforce development programs and her support in our efforts to meet the needs and priorities of the U.S. Navy for our nation’s defense.”