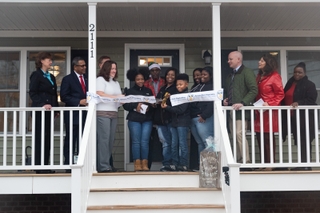 Elected officials and community leaders joined representatives from Newport News Shipbuilding and Habitat for Humanity Peninsula and Greater Williamsburg Tuesday to welcome the McCallum family to their new home. The house is the 17th that shipyard volunteers have constructed in partnership with Habitat for Humanity. Photo by Matt Hildreth/HII

Tuesday’s ribbon-cutting ceremony welcomed Crystal McCallum and her three children to their new home on Madison Avenue in the city’s Southeast section. It is the 17th house company volunteers have constructed in partnership with Habitat for Humanity Peninsula and Greater Williamsburg since 2002.

Damon Saetre, Newport News’ vice president of integrated planning and production control, presented the house keys and a plaque to McCallum. Her home is the 200th built by Habitat for Humanity and its partners.

“There is a sense of purpose and accomplishment that comes from building things with your hands – whether it’s a ship or a house,” Saetre said. “The tools and materials may be a little different, but the builders’ dedication and pride is the same. At the shipyard, we believe that our work allows us to be part of something greater than ourselves. The same is true of this project.  These homes make our community stronger, they provide safety and stability for our neighbors, and they provide hope for a better future. We could not be any happier to be part of making this house the McCallum family home.”