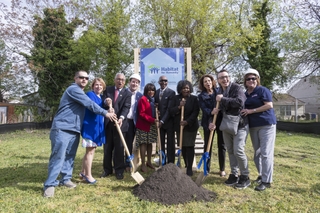 Representatives from Newport News Shipbuilding and local government, elected officials and the community broke ground on the 16th house shipyard volunteers will build in partnership with Habitat for Humanity Peninsula and Greater Williamsburg since 2002. The new home build in the southeast community of Newport News will be dedicated to Everett H. Jordan Jr., the former director of The Apprentice School, and Ron Nelson, a longtime Habitat construction supervisor. Photo by John Whalen/HII

The new home build in the southeast community of Newport News will celebrate the lives of Everett H. Jordan Jr., the former director of The Apprentice School and 44-year veteran of the shipyard, and Ron Nelson, a longtime Habitat construction supervisor.

The men met in 2002 when the partnership with Newport News Shipbuilding and Habitat began, and they formed a friendship and helped build a stronger foundation for low- to moderate-income families in the area. Jordan and Nelson died in February 2018 and November 2017, respectively.

“When our company began partnering with Habitat for Humanity, Everett was put in charge of the partnership,” Ray Bagley, Newport News’ vice president of trades operations, said during the special ceremony. “He took great pride in his role and continued to coordinate and engage in our efforts in all 15 houses we’ve built so far for these deserving families.

“Like Everett,” he said, “we’re proud to be a part of this important program and proud that some of our shipbuilders can also call themselves homebuilders.”

The family selection process has already begun. The homebuyer will be required to maintain steady employment and good credit and provide 400 hours of “sweat equity” to help build their home. Once construction on the 1,200-square-foot, three-bedroom, two-bathroom, ranch-style home is completed, the family will purchase the home from Habitat with a 30-year, no-interest mortgage, which illustrates Habitat’s objective to give families a “hand up” rather than a “hand out.”

“It is inspiring to have a company like Huntington Ingalls Industries not only provide financial support, yet actually come out to help build the home,” said Janet V. Green, CEO of Habitat for Humanity Peninsula and Greater Williamsburg. “Habitat is so fortunate to have such a caring and committed company like the shipyard in our community.”

About Habitat for Humanity Peninsula and Greater Williamsburg

Habitat for Humanity Peninsula and Greater Williamsburg is a non-profit organization serving the cities of Hampton, Newport News, Poquoson and Williamsburg and the counties of Charles City, James City, New Kent and York. The local affiliate has built, renovated and repaired more than 250 homes since its founding in 1985. Habitat relies on building partnerships, volunteer labor, and donated materials to continue to produce safe, decent, affordable housing to homeowners with excellent credit, an income between 45-80 percent of the area median income, and the ability to pay for their new Habitat home. Homeowners purchase the new house with a no-interest, 20 to 30-year mortgage carried by Habitat. For more information, visit www.HabitatPGW.org.