"The 5K is a fun event that encourages families, friends and co-workers to get out and do something active together," said Brady Goggin, HealthWaves' program coordinator.

The 5K started at Victory Landing Park near the Virginia Advanced Shipbuilding and Carrier Integration Center (VASCIC) and went north on West Avenue to 35th Street. From 35th Street participants crossed over to Washington Avenue and proceeded north to 50th Street before returning to cross the finish line at Victory Landing Park. The wellness event was open to HII employees and their families.

NNS' engineering and design team took home the Shipbuilder 5K Challenge Cup, which is given to the shipyard division that produces the most event participants. Trophies were also presented to the top three male and female finishers. Winners in the male category were Chuck Love, Colin Meigs and Evan Danz. Female finishers in the top three were Shameia Rogers, Whitney Dunning and Amanda Brelsford. 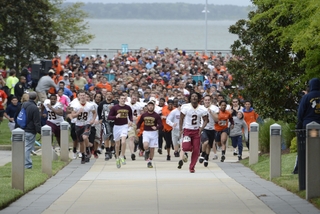