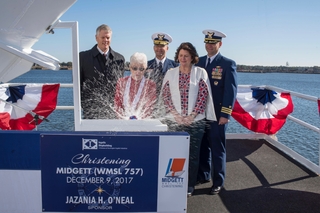 “We often speak of our service as a family, our Coast Guard family,” said Adm. Charles Michel, vice commandant of the U.S. Coast Guard, who was the ceremony’s keynote speaker. “The Midgett name takes that seriously with a family legacy unprecedented in the armed services, a family that is all about service before self. Such a special name deserves to be emblazoned on a special platform. The Ingalls Shipbuilding team have built this incredible platform, something to be incredibly proud of and something the men and women of the United States Coast Guard take very proudly.”

“Midgett is the eighth ship we have built in this class,” said Ingalls Shipbuilding President Brian Cuccias. “And with her, we’ve proven once again that American workers, Ingalls shipbuilders, can take on some of the most challenging manufacturing projects in the world. All Ingalls ships are built with one goal in mind: to protect the brave men and women who protect our freedom. Our Ingalls/Coast Guard team continues to get stronger and more efficient with every ship we produce. And Midgett will be no exception.”

Jazania O’Neal, Midgett’s granddaughter, is the ship’s sponsor. She christened the ship by breaking a bottle of sparkling wine across its bow, saying, “In the name of the United States of America, I christen thee Midgett. May God bless this ship and all who sail in her.”

Legend-class NSCs are the flagships of the U.S. Coast Guard. They are the most technologically advanced ships in the Coast Guard’s fleet, with capabilities for maritime homeland security, law enforcement and national security missions. NSCs are 418 feet long with a 54-foot beam and displace 4,500 tons with a full load. They have a top speed of 28 knots, a range of 12,000 miles, an endurance of 60 days and a crew of 120. The Legend-class of cutters plays an important role in enhancing the Coast Guard’s operational readiness, capacity and effectiveness at a time when the demand for their services has never been greater.